Dear Evan Hansen has been my most-anticipated Broadway to West End transfer since the Hamilton hysteria struck the UK. Similarly to Hamilton, I’d heard only glowing reviews of the show, so it felt like something of a miracle to be able to get hold of tickets within the first year of the show’s opening… even if doing so did require booking eight months in advance and just the one small mental breakdown over ticket sales.

Prior to the show’s West End opening in Autumn 2019, a book adaptation of the musical was also released by Penguin, and I was kindly gifted a copy that summer. You can read my full review of the book here, but in short, I was incredibly impressed that a novel based on a production, rather than the other way around, could be so thoroughly enjoyable. And the reason I’m telling you this now is because I think my prior enjoyment of the book and the assumptions I’d made from reading it had a significant impact on my consequent opinions of the musical.

The story follows protagonist Evan, a socially anxious teenager who finds himself accidentally in the middle of a teen suicide scandal. Evan, a solitary introvert with no friends and struggling with his own mental health, is mistaken to be the best friend of Connor (the troubled classmate who passed away). As a result, he finds himself immersed in and welcomed as part of the victim’s family, indulged in kindness and popularity at school, and as the ringleader of a wide-scale kindness campaign in Connor’s memory. In a twisted way, the tragic death of this individual had actually transformed Evan’s life, and for the first time, made him feel seen for who he is.

Purely from the book and the subject matter of the production, I expected Evan to be portrayed as a serene but inwardly anguished character; somebody who gave the impression that they were simply enduring the challenges of high school and putting on a brave face, with much more going on below the surface. I thought that some of those inward traits gradually becoming unveiled and more visible would be a key part of the story’s progression.

However, I was surprised to find that the creatives of the show took the primarily comedic direction instead: Evan was portrayed as a flustered, highly socially-awkward and somewhat hyperactive teen. And although Sam Tutty did a brilliant job of capitalising on this humour in an endearing and engaging way, and this no doubt translated much more easily on stage than a more subtle approach, I couldn’t help but feel these decisions lacked the depth that the character, in my opinion, felt like it needed. Playing for the laughs felt like a safer option, rather than a portrayal of mental illness that may possibly be more tangible and relatable for the audience. 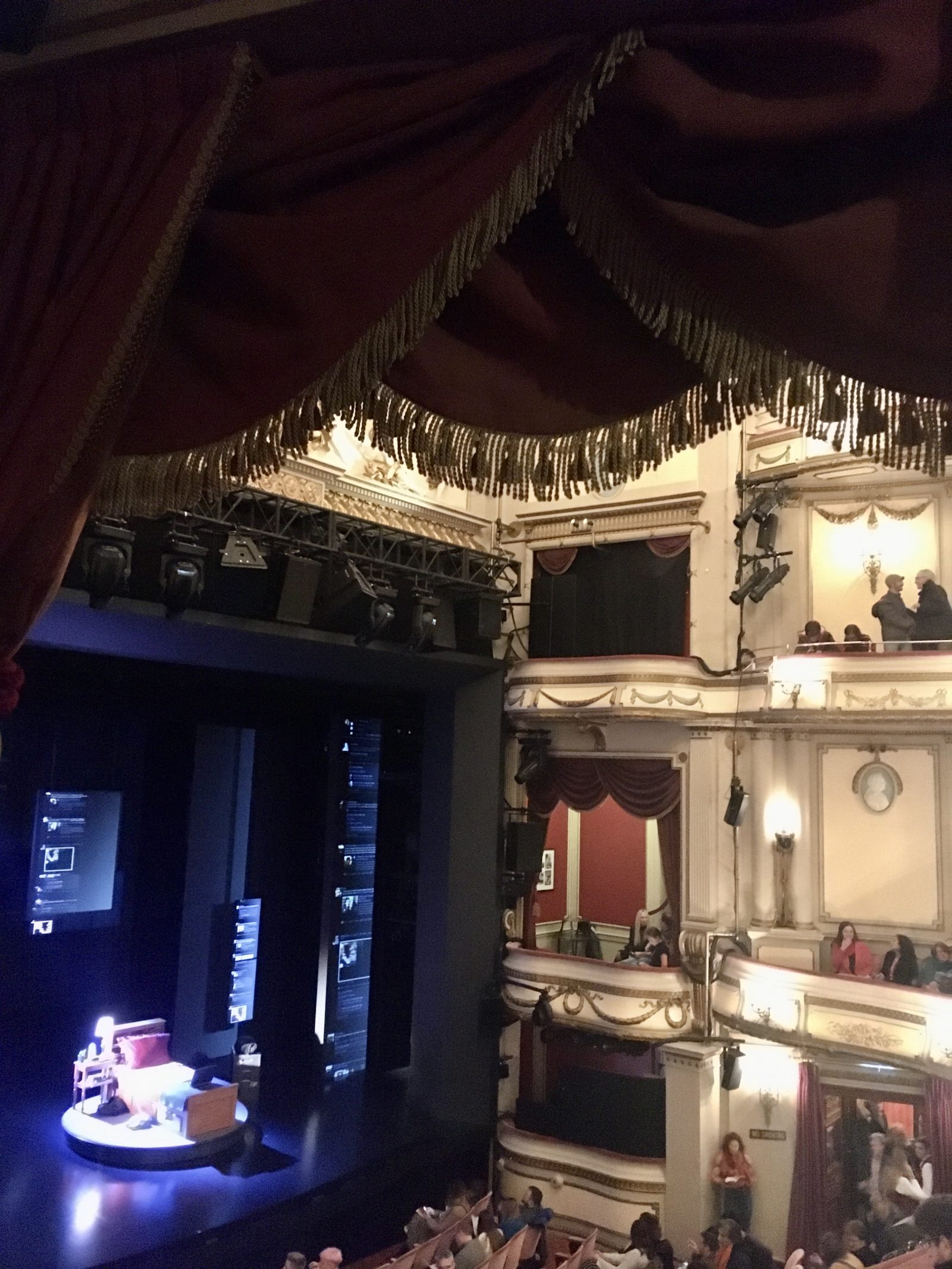 That said, the surprisingly small cast of this musical all gave nuanced and impactful performances, with Connor’s parents in particular, Lauren Ward and Rupert Young, really driving home the complex and often incomprehensible emotions surrounding their grief. Similarly, Evan’s mum’s performance of So Big / So Small, by Rebecca McKinnis provided one of the more poignant moments of the production, with an audible impact on various audience members who could be heard sniffling around us. Although I personally was incredibly surprised that the overall emotive impact of the musical never seemed to hit me the way I thought it would, moments such as these punctuated the story and definitely helped keep me invested in the plot. And despite everything, You Will Be Found remains one of my favourite musical theatre songs in recent times.

Something I did really like about this production was the creative use of set design (David Korins) and lighting design (Japhy Weideman), reinforcing the modernistic context of the musical. From various screens and panels on the stage filling up and flitting through social media posts as if somebody was scrolling on their phone, to the lighting effects used to communicate the fact two characters were texting or emailing as opposed to talking in person, the technological elements of the story added a strong dimension of uniqueness to the performance.

In fact, many of the creative decisions made under Stacey Mindich’s production, in my opinion, did a great job of visually communicating one of the underlying themes of the musical; the complexity of social media and the perils of communicating via technology. I felt the show struck a really nice balance between portraying the positives of chatting online as a way of combatting loneliness and building connections, whilst demonstrating the overwhelming and unrelenting bombarding of content and hashtags and shouty opinions, that I’m sure many of us know all too well.

This incorporation of technology and social media, as well as the other major theme of mental health and suicide, mean that the musical has rightly become of sentimental value among younger audience members in particular. And even though I personally felt that the musical fell a little short of my own expectations, I recognise the power that such a production could hold for the younger and next generation of theatregoers; providing them with a whole new experience and challenging any potential misconceptions about what musical theatre entails. I have no doubt that musicals like Steven Levenson’s Dear Evan Hansen are getting new bums on seats and welcoming them to the magical world of theatre, and for that, I’m grateful that this show exists and is enjoying the success it appears to be.

Although you wouldn’t assume that a musical about mental illness and suicide would be a laugh-a-minute, this show is a genuinely humorous and light-hearted production to be enjoyed by people of various backgrounds. The universal appeal of Evan Hansen, a character fighting his own demons and not always getting it right, but still wanting nothing more than to keep the people around him relaxed and fulfilled, is something I believe we can all take something away from. And although I’d personally recommend the book over the musical (something I still can’t quite get my head around!), if you have the opportunity to experience the show for yourself, I’d still wholeheartedly encourage you to take it.

This was my first visit to the Noel Coward Theatre, and the first time in a long-time I decided to stay in my wheelchair rather than leave it in the cloakroom and walk to my seat. Although from seeing the venue I now reckon I would have been okay to walk, I was incredibly impressed with the seamlessness of the process of getting us to our accessible seats.

We were greeted outside the theatre and directed to an accessible door just further down from the main entrance; even though there was still a small ledge/ bump to get into the building, my manual wheelchair could handle it. The lovely Front Of House Team Member, Marlon, guided us up a small portable ramp replacing 3-5 steps, past the accessible toilet in this quieter corridor, then paved a way through the crowds of patrons in the auditorium with a God-like authority I can only envy. He seriously needs to teach me his ways.

It wasn’t long until we made it to the door of Box M, our home for the evening. Although the doorway entrance felt quite narrow and is perhaps something to be conscious of if you’re using a bigger mobility aid, the box itself was just wonderful and completely exceeded our expectations. There was so much room for storage and maneuvering about, meaning we could keep the wheelchair safely with us when I transferred to a seat, and we could position our portable seats ourselves to get the best view without disturbing anyone else. Similarly, I also had the room to cross my legs and keep them up on the seat, to stop the blood pooling and consequent dizziness keeping them down for long periods of time can sometimes cause.

The view from the box was fab: again, much better than I was expecting – the box seating was level with the circle so we could see straight down onto the stage. Rather than being positioned too far forward which I know from experience can give you only a limited, side-on view, there was good visibility of the entire stage without having to lean uncomfortably. Marlon came to check on us during the interval and escorted us out at the end of the show, but we were happy as Larry throughout the entire experience.

As for the content of the show, I have mixed opinions. Although special effects are used throughout the performance, Act One was definitely less intrusive than Act Two, where harsher lighting dynamics and sound effects are used to indicate scene changes. If you’re sensitive to noise and particularly to light, I’d advise taking particular care during the Good For You number towards the end of Act Two.

And a final point to make for anybody concerned is that, in my opinion, the subject matter of mental illness and suicide was handled in a mature and responsible way. Although, as I mentioned earlier, I felt that the characterisation of Evan was rather caricatured and stereotypical, there were no eyebrow-raising or stigma-fuelling moments that caused concern, nor was there anything that struck me as potentially triggering. Of course, my perceptions are only my own so please do take care and seek further guidance if you feel this may be a challenging watch for you, but on the whole, it felt like a balanced and responsible portrayal of the unique challenges of mental health issues, at a time where the world seems to need it the most.

So to conclude… although Dear Evan Hansen slightly fell short of my personal expectations, it still stands on its own as a reputable and thought-provoking new take on musical theatre, hosted in the West End in a wonderful theatre which offered us an excellent accessibility experience. Yay!

You can find out more about Dear Evan Hansen and book tickets on their website. You can also use my affiliate link for tickets here, and purchase the book (which I wholeheartedly recommend!) using my affiliate link here. Enjoy, and let me know what you think!